Last week I wrote a post about interactive storybook apps, what that means and what they are, after realizing that not everybody was familiar with them.  Now I’d like to talk about Kickstarter and crowdfunding for the same reason.  We’ve been so focused on getting ready for our Kickstarter campaign that we’ve neglected to realize that a lot of people haven’t been to Kickstarter and don’t know what it is or how to use it.

If you haven’t already, check it out really fast before you read further — www.kickstarter.com

When you get there you’ll see a featured project in the middle, categories and types of projects on the right, and more recent projects further down.  “Projects” are the things that people are Kickstarting, or trying to raise money for.  Kickstarter exists so that startups and even established businesses can raise funding from anybody who’s interested in their products and projects.  This is called “crowdfunding” – it’s open to anyone who wants to be involved.

Some of the projects seeking funding on Kickstarter’s homepage at the moment are the Duo Coffee Steeper, Outerlands – a documentary about video game culture, and a movie theater in Wisconsin raising money to convert to a digital projection system.

So for an example of how it all works, click on the Outerlands: Season One documentary:

There are two twists with Kickstarter that make it different from normal money-raising and investing channels.  Check out the right-hand side of the Outerlands page, and you’ll see a rewards area, which starts with “Pledge $10 or more.”  If you give them $10, you’ll receive in return the rewards listed underneath.  If you pledge $25, you’ll get the stuff in that box.  And so on, with the dollar amount going up for larger rewards.  So instead of just handing over money and hoping the product succeeds, you get something in return.

The other twist is that if a project doesn’t meet its funding goal, it doesn’t get any money.  So in this case, if Outerlands doesn’t get $210,000 in pledges, they don’t get a dime.  $209,999?  Nada.  This protects the pledger and helps ensure that the project is on the up-and-up.

Kickstarter is owned by Amazon, which gives it street cred.  And there’ve been some fantastic stories about how struggling businesses Kickstarted their project, got way more money than they asked for, and got a whole new lease on (business) life.  One of my favorites is the Kerfluffles marshmallow lady:

So for Mighty Yeti and our interactive storybook apps, the idea is that a crowd (you!) will fund our project by pledging money and getting cool rewards in return, and also feel good that you’re helping to kickstart us into existence and make our awesome projects a reality.  We hope you’ll participate when our Kickstarter campaign goes live next week! 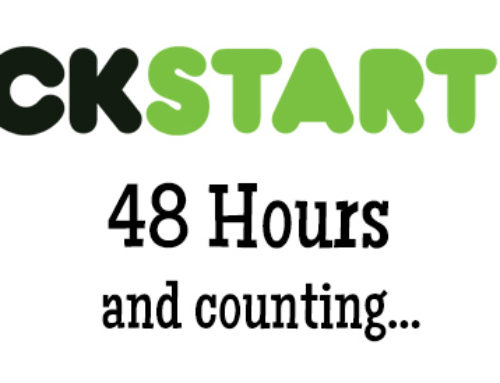