Taking a break to get out for a Meetup

We spend a lot of time with our heads buried in our keyboards and screens around here, so we sometimes forget that a lot of people are doing the same thing we’re doing. Real live people who we could talk to about the pros and cons of app-making if we were to go somewhere where the likes of us gather. Thankfully there’s a great organization called Meetup, and we found a fun group within it called Silicon Valley Apps for Kids. They had a meeting last night, so we got a babysitter and drove off to San Carlos in search of professional camaraderie.

We had a great time talking to the people who are building companies like we are, the people who want to make apps, and the people who have already made apps and have faced and conquered the challenges we’re up against. At Mighty Yeti we do a lot of exchanging of ideas between the two of us and our programmer and artists, but it’s very different from meeting new people and getting a whole new perspective.

Last night after the official presentation we talked in a smaller group about marketing. Syd Field said it about screenwriting decades ago but might as well have been talking about marketing apps in 2014: Nobody knows anything. This will continue to be the big challenge for everybody, and we’re all trying to figure it out.

Getting out is good, talking to people is good. Exchanging ideas will only make us better, so we’re making it a priority to go to more industry events and talk with our peers in the future.

In other news: Kickstarter post-mortem post coming soon – how it ended and what we’ve been doing since. 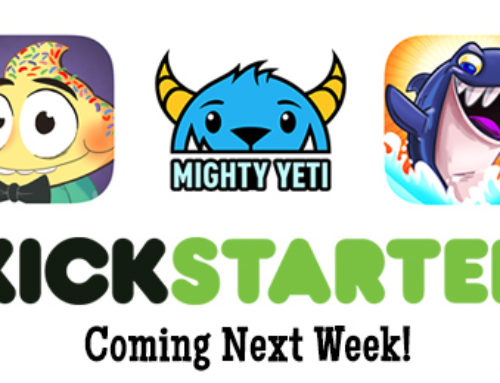