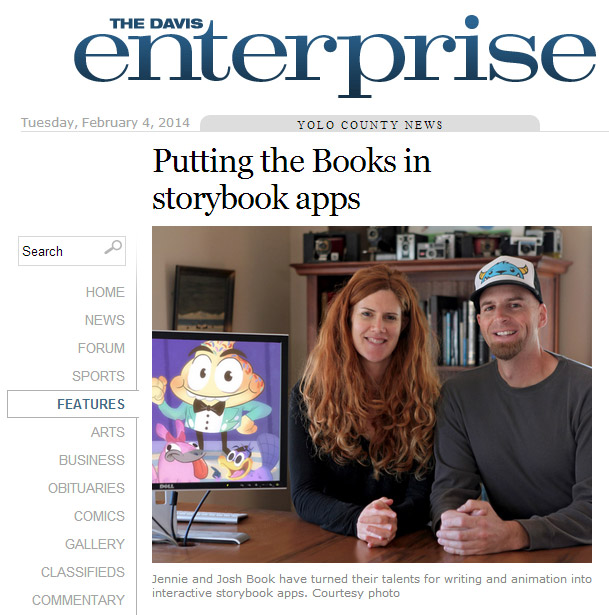 We had a great write up about the Mighty Yeti Kickstarter crowdfunding campaign in The Davis Enterprise. It’s the hometown newspaper of Josh Book, the Creative Director and Co-Founder of Mighty Yeti Studios. The article covers the Kickstarter, Mighty Yeti’s projects, and crowdfunding in general. It also covers our interactive storybook app creation process. You can read it here:

Together, and with the help of some talented illustrators, the Books have collaborated on two storybook applications with a couple more in the pipeline and have turned to Kickstarter to help them over the financial hurdle of getting those apps into the marketplace.

“A Shark Knocked on the Door” and “Mr. Cupcake has the Sprinkles” are the first two products coming out of Mighty Yeti, both interactive storybook apps that will be available for iOS (iPad/iPhone/iPod Touch), Android and Kindle Fire tablets and devices, in April.

“A Shark Knocked on the Door” tells the story of a young boy and his grandmother and their favorite pastime of sailing boats down the gutter after a rain storm. The story is based on something Baker and Jennie’s mom actually love to do.

When the fictional characters’ boat disappears down a storm drain, it’s returned to them by a friendly shark and soon all three are off on a magical undersea adventure.

As with their other storybook apps, Shark started in Jennie’s imagination, but writing the story was just the very beginning of a long and complicated path to a final app.

An illustrator has to be brought in, and in the case of Shark, that was Roman Laney, who worked with Josh at Nickelodeon. From there, storyboards need to be made, interactive elements broken down and programmed, the sound section built, including everything from music and sound effects to voices, and much more.